The Etna, declared UNESCO World Heritage Site for being one of the “most emblematic and active in the world”, is also the highest volcano in Europe with its 3,340 meters above sea level. Its craters, lava flows, lava caves and the transformations that it has undergone over time are the main aspects of interest for research. Eruptions, that recur periodically, fascinate tourists and scientists making the volcano become famous worldwide for its spectacular flaming tongues of lava.

Its first eruptions are to date back to the middle-lower Pleistocene period (570,000 / 600,000 years ago). The current volcano building, the height of which undergoes constant changes due to the accumulation of materials or collapse of the walls, was built on the old volcanoes of Trifoglietto (whose collapse has generated the pit crater of the Valle del Bove) and Mongibello (from Arabic “Gebel” meaning the “mountain of mountains”), which is still in activity.
The summit of the volcano consists of the Central crater (Voragine and Bocca Nuova), the North-East crater (1911) and the South-East crater (1971).

In addition to the upper craters there are of particular interest the Montagnola and the Monti Silvestri. The Montagnola is one of the most impressive secondary cones of the Etna: it rises on the south of the Central Crater, on the high southern slopes where it is implanted at an altitude of 2,500 meters following the eruption of 1763.
The Monti Silvestri were formed as a result of the eruption of 1892. Between the Upper and Lower Monti Silvestri passes the road that leads from Zafferana Etnea and Nicolosi to Rifugio Sapienza and the square of the cableway, a destination for all visitors who are going to start climbing the volcano.

Infrastructure does not allow to reach the top by car but, having reached the tourist resort around the Etna cableway, then continue the journey for about another 20 km in the direction of Zafferana Etnea.

At 2,900 m altitude is the famous “Torre del Filosofo” (Tower of the Philosopher), a building so named in memory of Empedocles (492 BC. – 430 a. C. approximately), the philosopher of Agrigento who climbed the volcano to study the phenomena and set there his own home.

Above 1000 m in winter you can find snow which often lasts almost until summer. The snow-covered areas are easily reachable only from the south and north-east, where also two ski resorts are (Etna North and Etna South). From the south, from the historic Rifugio Sapienza in the territory of Nicolosi, you can admire the gulf of Catania and the valley of Simeto. From ski slopes of Piano Provenzana north, in the territory of Linguaglossa, Taormina is visible to the coast of Calabria. 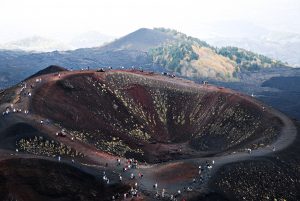 Just two stones’ throw away from the Strait dividing Sicily from the Italian Peninsula lies delectable Taormina, facing out toward the Ionian Sea from a high, natural terrace.

With its Medieval architecture, its ancient Greek soul, and the colors and smells of Mediterranean foliage, Taormina is one of the most beautiful places to visit in the world, and the Sicilian climate makes it an ideal destination any time of the year.

Standing among cypresses and prickly pears, its cavea dug into the rock, Taormina’s Hellenistic Theatre was transformed into an arena by the Romans. It offers a spectacular view onto the turquoise sea that runs all the way to the Calabrian coast in the northeast, to Syracuse in the south, and to the smoking peak of Mt. Etna in the west.

No doubt that the gamut of travelers – nature lovers, history buffs and art enthusiasts alike – will find that Taormina does not disappoint.

Entering the city from the Porta Messina wall, one arrives right in the Medieval heart of Taormina.

Not far from Porta Messina is Palazzo Corvaia and the 16th-Century Church of St. Pancras, built on the remains of a Greek temple. Be sure to see the cavea of the ancient Odeon and the Church of Santa Caterina d’Alessandria, both rather close by.

Here, the street widens into Piazza IX Aprile, the terrace of which boasts a privileged panorama. The Porta di Mezzo, superimposed by the 17th-Century Clocktower, leads to Taormina’s Medieval Quarter, made up of characteristic edifices with Romanesque and Gothic architectonic elements and ornamentation.

The Badia Vecchia (Old Abbey) and the massive defense structure that is the Palazzo Duchi di Santo Stefano (Ducal Palace of Saint Stephen) are from the Norman Era, and feature Gothic, Arab, and Norman design elements.

All this history lives amidst Taormina’s renowned lush natural surroundings that repeat themselves in the Public Gardens of the Villa Comunale.

Obligatory is a stroll along Corso Umberto I, the main street in Taormina, ideal for shopping. Many artisan shops line the way, selling a bit of everything: ceramics and jewelry, clothing and souvenirs.

Undoubtedly Taormina is also favored for its beaches and, during the warmer months, it is difficult to resist a refreshing swim in the transparent waters near Giardini Naxos or those washing up on the beaches of Mazzarò (below Taormina, accessible via a funicular

Another beach faces Isola Bella, a tiny island situated in the Bay of Taormina and connected to terra firma by a narrow stretch of land that can only be seen if the tide is low. It is a protected natural oasis, where one can catch glimpses of incomparable natural sceneries. 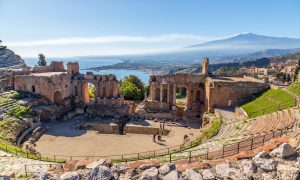 • Duration of tour: 8 hours.
• Our driver will be at your hotel, or at the address indicated by you, with the car you have booked.
• Our rates DO NOT INCLUDE private guide, entrance fees and meals, unless it is specified in your reservation.
• It is recommended to wear comfortable shoes.
• Our driver will find a nice restaurant where you can enjoy a traditional Italian meal with typical local products.

Etna in Off Road
Scroll to top